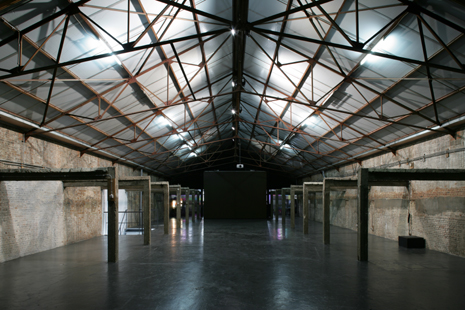 Argos was founded in 1989 for the purpose of stimulating and promoting audiovisual art; at present it is the country’s main source of reference for this type of artistic practice.

1989 - 1994
During the first period the organisation focuses on showing a wide variety of works within Belgium. In 1990 Argos sets-up festivals in Antwerp, Brussels and Louvain related to the films and videos realised by Jean-Luc Godard in the 1980s. This is followed in 1991 by 'Dancing Images', a festival taking place in those same cities, centring on the relationship between film/video and dance. From 1992 onwards Argos holds a range of thematic programmes in the majority of Belgian arts centres. Apart from organising screenings, Argos also operates as a distributor. Works are thereby distributed to (mainly) foreign festivals, cultural centres, museums and television networks.

1994 - 1996
As hitherto there was no such thing as state funding for the mediating --typically non-commercial tasks, Argos dealt with these itself, soon accruing a deficit. In

1994 the Flemish Community allocates an operational subsidy for the first time, allowing Argos to make a start in decreasing its debts.

1996 - 1999
The realisation of a centre takes shape in 1996, when Argos finds accommodation in the gallery complex at Kanal 20, a Brussels premises situated on the canal, and starts exhibiting video and multimedia installations in its very own space. 'Eclipse' by Antwerp artist Anne-Mie van Kerckhoven, is the first presentation, to be followed by projects from Koen Theys, Richard Venlet, Garry Hill, Pascal Baes, Georges Bures Miller, Frank Theys, David Claerbout, and others.
In 1997 the first Argos Information Days are held, with great success, offering an annual preview of Belgian artists' films and videos. The event continues until 2001, when it is incorporated as the Belgian Focus section within the Argos festival that starts the same year.
Argos moves to the first floor of a former warehouse off Sainctelette Square in 1999.

With a floor area of 500 square metres, of which 300 are solely allocated as exhibition space, Argos is able to operate on a challenging, international and logistically appropriate scale. The space is primarily used for solo exhibitions; in general, projects that are coproduced by Argos. Artists exposing during this beginning period are, amongst others: Jan De Cock, Jayce Salloum, Heinz Emigholz en Joëlle Tuerlinckx.

2000
The video conservation programme starts up. The first project includes more than 100 titles containing an important body of Belgian works from the 1970s. It is the beginning of a conservation effort that, to date, contains more than 2.000 titles. Argos also begins to make its own publications, an activity that over the years results in some twenty catalogues and a number of limited and audiovisual editions.

2001-2002
The first floor space at Argos is renovated.
Architects Kris Kimpe and Bruno Poelaert design a public media library and the Black Box, a separate project space in which video projections and lectures can take place. At the same time a climate controlled archive room is provided. In 2002 French artist Mathieu Mercier realises an integrated art project for the glass door sections of the media library. In the same year, in a separate building situated across from the offices, Argos sets up a workshop where artists can find support facilities.

2001-2005
For five full years the Argos festival offers a platform for various forms of artistic expression within the domain of the audiovisual media. With, on average, ten locations, the festival spans the city. A whole spectrum of activities takes place: exhibitions, film and video presentations, concerts, interventions in the public space, lectures and symposiums. At the end of 2005 it is decided to stop the festival and to spread the programme over the entire year, rather than over ten days. For this reason, an expansion of the premises is planned, along with other improvements.

During the same year, Argos engages in the ‘écran d'art’ (art screen) series, the monthly screening of artists’ film and/or video, jointly organised by Argos and Cinema Arenberg. Also in 2005, Cera becomes a patron of Argos and allocates a subsidy for the subsequent three years, with which to extend the library, and, more particularly, to realise an online presentation of the collection.

2006
On the first of January Argos enters into The Arts decree, new subsidy legislation that supports the emancipation of all art disciplines and provides funding covering several years. Argos is recognised as an arts centre. With this comes an end, at the Flemish Community level, of more than ten years of one-year or project subsidies within all kinds of smaller subsidy regulations. At the end of 2006 Argos undertakes a huge rebuilding programme. The ground floor is expanded to achieve an extra 500m², increasing the overall area of exhibition space to over 800m². It is reinstated as a reception and major exhibition/presentation area.

The new ground floor, which is complementary to the existing exhibition space on the first floor, can accommodate large group or solo exhibitions, as well as talks, performances, screenings and musical events.

2007-2008
The expanded public spaces are abundantly filled. Diverse group exhibitions are presented, as well as individual projects. On Thursday evenings there are lectures, concerts and other presentations in the foyer. At the end of 2007 Open Archive takes place, a large-scale event-focused programme that uses the Argos archive as a motive for numerous presentations, lectures, symposiums or performances. The four-day event, FRONT-end, happening in September 2008, marks the launch of the online media library catalogue.